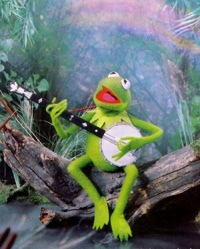 Kermit is everybodies favourite talking frog. From humble beginnings as one of 3266 siblings, he was the first of his family to move out of the swamp and in a stroke of luck was noticed by a talent agent and was shot to stardom in  Hollywood. Since that time he has worked as a television new reporter, a theatre stage manager, host of the Johnny Carson show, and he has his own star on the Hollywood  Walk of Fame.

However underneath his success and happy-go-lucky attitude lies the tortured soul of an abused spouse. For years he was actively pursued by Miss Piggy, who attentions swung wildly from inappropriate affection to violent rage. One minute she should be smothering him with kisses, the next she would be karate chopping him into the next room.  Eventually Kermit begun to return the affection, and eventually in the film Muppets Take Manhattan (unwittingly) marries her. The wedding was short lived, however Kermit continued to allow himself to be subjected to Miss Piggy’s unwanted attentions. The relationship is a classic example of an abusive partnership; short bursts of violence would be followed quickly by apologies and affection. Kermit always forgave her, and he never chose to leave. Miss Piggy is destined for stardom; just ask her. She knows what she wants and she wont let anything stand in her way. She puts on a feminine and charming exterior in public but is capable of violent rage when things don’t go her way. She is vain, conceited, egotistical and prone to bouts of selfishness. In an appearance on Dolly Parton’s musical variety show in 1987, Miss Piggy was intend on stealing the limelight from the show’s host, even to the extent of sabotaging Dolly’s musical performances. She is obsessed with Kermit the Frog and becomes frustrated and violent which he does not return her affections. The Count’s background is mysterious, however it is widely believed that he’s from Romania. He exhibits one of the classic signs of OCD, namely a compulsion to count things over and over. His need to count is so powerful that he has developed mind control techniques to hypnotise people who try to interrupt his counting. Once he has finished counting something, he experiences a burst of joy which manifests as maniacal laughter. He will even count something again immediately after he has just counted it. He even counts his cat (“ONE cat AH AH AH!”).

The Count’s condition may be genetic, as many vampire myths describe the creatures as being obsessed with counting small things. The Count has been able to make the most of his condition, as it has allowed him to get a job teaching children basic mathematics.

Big Bird is another favourite childhood character. His childlike innocence has helped children learn and feel better about themselves for 40 years. However for years Big Bird has suffered from an undiagnosed case of schizophrenia. Big Bird’s best friend is a large brown ear-less woolly-mammoth-like animal named Mr Aloysius Snuffleupagus. However Snuffie (as BB liked to call him) is invisible to everyone but Big Bird himself. Snuffleupagus appears to be a complex auditory-visual hallucination caused by schizophrenia. Being the only person to see or hear Snuffie, and having no one else believe that he exists, creates feelings of paranoia and persecution. Elmo has been part of the Sesame St troupe since the early 1970’s, and yet during that time his language and mannerisms have remained those of a 3 year old. He speaks in a very childlike manner, always referring to himself in the third person, and is often seen carrying an orange monster doll he calls  “David”. Despite being over 40 years old, Elmo has never matured beyond the level of a small child. Though not officially recognised as a mental illness, Peter Pan Syndrome is often used to describe adult individuals who exhibit childlike behaviour. The highly energetic drummer of the Muppet Show band Dr Teeth and the Electric Mayhem, appears to suffer from an unknown mental disorder which manifests itself as manic episodes, characterised by high energy levels, irritability, outbursts of aggression and verbal exclamations. He also exhibits symptoms of an eating disorder called Pica (typically characterised by the compulsive eating of non-food objects), as he constantly needs to be reminded that he needs to “beat drums” and not “eat drums”.

The trash-can living Oscar is clearly a sufferer of ASPD, exhibiting many of the symptoms including irritability and aggression, a lack of empathy for others, disregard for social norms, and a low threshold for frustration and anger.